People prefer and are more comfortable with different methods. Nothing wrong with that.

Hey there! My first post and it's in a thread I am keenly interested in at the moment because I too am presently using tegaderm for the first time. I had the entire inside of my forearm done on Thurs 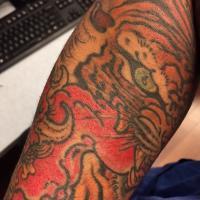 I'm currently visiting SF and while here I got tattooed by Kahlil. Due to the placement (my thigh) we decided to put some saniderm on it so it wouldn't imped on my walking around the city. I had used