Can this be corrected ?

By MakaveliX,
August 15 in Tattoo Advice 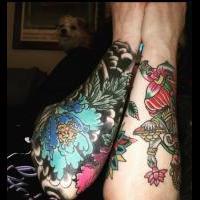 Please talk to a competent artist. Anyone who suggested a giant solid black arrow makes me question their ability. It's going to look even worse if you just cover it up with some ugly shit. Do not rus

You need to find an artist that specializes in that and get a consult. I have doubts about how well it will hold up over time, but I could be wrong.

I'm pretty sure he means what we all feel, we have had enough of this thread,    it's a fucked up tattoo by a scratcher and there is nothing that can be done to fix it, THERE ! that's i