"In A World of Compromise...I Don't" by Bob Roberts - Tattoo Book Review

book published by State of Grace 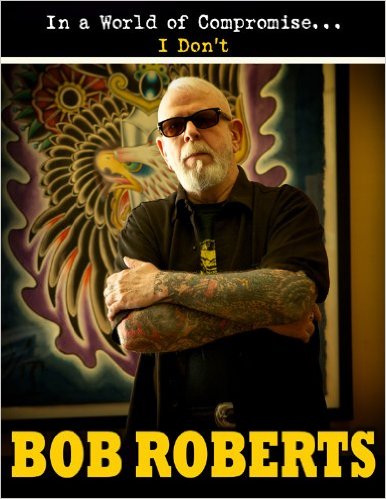 My first experience with Bob Roberts was in 1989. I had just moved from Monterey, a nice quiet place, to this mega asphalt hell called southern California. I was 17 and working as a union apprentice butcher. I had been tattooed a few times by my high school friend Aaron Cain. He had told me where to find Bob Roberts, who was know to me as the guy in the "tattoo times" who tattooed all the punk rock folks, so away I went. I drove from West Covina to Hollywood, which coming from Monterey was a long haul, to see Spotlight Tattoo. I walked in the door and no one was there. "What the fuck?" I thought. "Mecca and no worshipers?" so I went about my gazing. Bob was tattooing, greeted me with a squint, and I stared and stared at everything for what seemed like an eternity. It made such an impact on me that I can remember it to this day, and I have a terrible memory. The flash, stickers, little signs... man, it was cool. Where I came from, the tattoo shop look like a trailer or something, like you could pick it up and run with it. This was probably for good reason, the owner was no good.

So I'm there for maybe 1/2 an hour maybe 45 minutes and bob stands up with this sort of bull grunt, walks over and says, "Well you gonna get tattooed or what?" I could feel my self get hot and start to sweat when the words came out, "Ppbff, no man, I don't have any money." This, apparently, was the exact thing that needed to be said to receive this gift - "What the fuck you think this is, the god damn library?" He glared at me and I think he may have also gotten a little taller. I decided that my stay was over, thinking that I'd better go before this before this dude popped me in my mouth. That is what tattooing was to me, and at times, it still is. I can't possibly thank Bob Roberts enough for teaching me that I was standing in his church, and I had brought no offering. Nothing but stares of amazement at all the reapers and tribal designs, which ruled long before the Chili Peppers made them popular.

So here's his book, and at first the price hurt my ass, dispite the fact that this printing was part of a limited run of 1000. Sometimes I think that book prices are being driven way up for no real reason these days. At first glance I thought this was confirmed, but then I started to get into the book. I mean not just the pictures, I started really reading it. First the forward, then the intro from Ed Hardy, which is pretty cool. Ed gives a nice time line, and there's a ton of respect praised upon Bob without too much self celebration. Then I read the Bob interview, which is really more of a manifesto, 'cause he's sort of staking his flag in the back of tattooing. As I thumb through the pages, I'm reading this awesome history of tattooing and life. There are some real moments in this book that really inspired me, like his relationship with his kids, and how much he adores charlie is incredible. Also his friendship with Horiyoshi, and how he speaks of the connection they have. I am especially grateful to hear him talk about how that we aren't shit without the customers. It's an awesome point of view and well worth the read. Bob Roberts' life is amazing, with all his ties to Ed, Greg Irons, Zeke Owens, Jack Rudy, and on and on. How could this book this go wrong? It can't. I don't want to go into every detail of the book, but it's refreshing to see a man that's been tattooing that long and is still inspired and can be honest about himself. Bob Roberts is man is full of integrity and opinions, and he shares them all without apologizing.

The book is probably 7/8 photos which is good, 'cause man, his paintings are incredible. There's big sections of tattoos, then line drawings, then tattoo paintings and non tattoo paintings, some of the photos are a little pixelated but makes no difference. The only thing I find strange is that he has his current crew in the back of the book. I understand why, but it dates the book, so in three years when people have moved on they'll still be there, in the back of Bob's book. I was told that was one of his requests, so God bless this man, for never giving in to what everybody else wants him to do, and still reminding me that it's his church and I'm just standing in it, looking at pictures.

You can buy it here: Horitaka's State of Grace.