ENCYCLOPEDIA FOR THE ART AND HISTORY OF TATTOOING
BY HENK SCHIFFMACHER, AKA HANKY PANKY 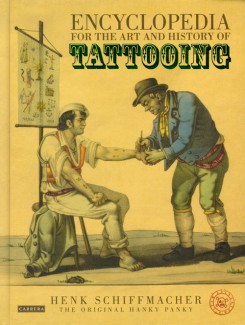 I believe my first true encounter with Henk was at the last Amsterdam convention in 96. I had met him before, but never got the full experience.

I had flown to Europe with Jeff Rassier, it was my first trip there and I was stoked. We got to our hotel, threw our shit in the room and headed straight to Henk's shop. The red light district was full of dirt bag tattooers roaming about, lurking on the hookers and being amazed by all the the weed, pussy and down right foreignness of the place. When we got to the shop we found Freddy Corbin and Mike Wilson working. When Freddy introduced me to Henk, I was greeted with a great big smile and a hand shake that made me feel as if I was child shaking a grown ups hand. He was as welcoming as you could ever want. With a hundred people there to kiss his ass, Henk still had the ability to be genuinely hospitable. The trip was extraordinary, and by the end of it I think my life was different. I have never looked at tattooing the same way since. It was then that I realized that this was a sacred family, and I was welcomed to it in Amsterdam, with Henk sitting at the head of the table. There are so many stories from that week and those experiences make it all worthwhile.

I was there for the unveiling of the museum, and had the good fortune of helping Henk and ten other people get the last bits of it together immediately preceding the opening. I believe that Henk has the most extensive collection of tattooing machines in existence, he even owns the Samuel O'Riley machine. In addition, he has everything from a hippo skull to tattooed skin, chopped off fingers, and mannequins in full samurai dress. I'm pretty sure he even has a dick in a jar. Hank has a library that can't be beat, hundreds of books that I had never before encountered. Hanky Panky is ostensibly the worlds best historian in the field of tattooing. He has the most extensive collection I have ever had the pleasure of investigating, and the walls of his home are stacked with more museum artifacts. I have heard that he is to open another museum soon, I hope to God that this is true.

So Hanky Panky has made another book, and man, it's a doozy. This hefty family bible size book could just about change your life. With all of the information that he has, combined with a tattooer's background, he’s put out an amazing book full of everything anyone could think of to include in a book on tattooing. It's all in there, the full spectrum, from bands who are tattooed, as he does know a lot of them, to the rarest of tattooed tribes. Ritual, spiritual, and clinical forms are well covered. As for tattooers, this is where Henks sense of humor and shear lack of giving a fuck comes into play. There are so many tattooers in it that I know are historically significant, and there are some that I have never heard of before. This Encyclopedia has a wealth of flash, machines, stencils, photos of tattooed tribes, I can look at this thing for hours then come back to it and start over again. This is a must for any tattooer's book collection. Just the brief history and hilarious shit said about people is great, even syphilis gets showcased.

This man has kept the spirit that is tattooing alive. If anyone had the pleasure to see his original shop or the museum you know what I mean. So I say thanks to Henk for adding this gem to the tattoo world. It seems tattoo books are never ending, whether people are putting them out about them selves or regurgitating flash into new books, but this one actually has a purpose and is separate from the rest. All hail Henk.

The Tattoo Encyclopedia is available here, and can be found at Temple Tattoo in Oakland, CA this winter.