What You Should Consider Before Getting a Tattoo

Getting a tattoo is a big decision in your life; after all, you have to live with your decision for the rest of your life. That’s why you should not rush the process of getting one until you are absolutely sure what you want. The days of the misconception of tattooed people are a thing of the past, and now you can get a tattoo without it affecting your life or how people see you. However, this doesn’t mean that you should jump into the process without thinking about the consequences.

Many of the world’s top sports stars have eye-catching tattoos. In fact, in some sports it is becoming increasingly rare to see tattoo-free athletes these days. Yet, have you ever stopped to wonder whether this type of body art helps them or holds them back? There are a few key factors to take into account when assessing this matter.    Added Confidence Whether you are in the NFL, the NBA or some other league, the need to be supremely confident rises as you get to the top of any s

Aftercare for Newbies: The Basic Tattoo Aftercare You Should Know

It’s coming up to a year since I got my first tattoo. Since then, I must have caught the bug - because I now have five of them. However, one thing I’m still as careful as I was the first time around is aftercare. I had this fear of it getting infected or scabbing over and just generally looking awful if I didn’t take proper care of it, so I was extra cautious with making sure I looked after my new ink. I did a fair bit of research in preparation, and one thing I found helpful was the below infog

I think for this post it may be important to address an issue that is becoming more and more prevalent in fields that deal with modifying skin in any sort of way.  Tattooing and piercing is what this blog is about so that is what will be addressed in reference to the material. In a day and age where we supplement our diet with many additional chemicals like vitamins, omega 3 and 6 fatty acids (fish oil), creatine etc. whether its for weight training or dietary supplementation it is importan

So I got my first tattoo 6 days ago, it’s a lotus flower with small dots for detail. I noticed on the second/third day of having my tattoo that the dots on the left side had expanded underneath the skin, I’ve done some googling and I think it might be ink blowout. However it looks quite odd compared to the right side which is supposed to have a symmetrical pattern. I’ve been wondering whether because it’s a new tattoo that this blowout with disappear?? Any help?? Thank you in advance 🙂 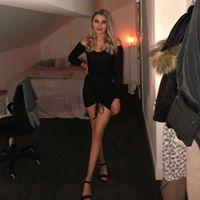 I figured I would deliver on my blog promise and discuss some mechanisms of tattooing and the science behind them. I'm sure many of the experienced tattooers and tattooies have at least heard many of these topics but I think this will establish a good break down into to the sweet science of tattooing from a new perspective.  Just to preface my background a bit I have been getting tattooed by Zenon Pawelski for 7 years now and I have been privileged to be his friend enough that he would let me ta

I just got my first tattoo of a little Forrest on my wrist and I’m freaking out literally till I’m crying because I think it looks in attractive. 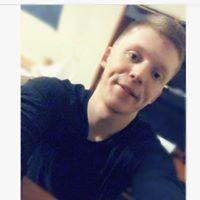 What is wrong with my tattoo

What does this tattoo simplify?

Well I am planning to get a tattoo and I love this one but I really don't know what it simplifies or means to tell others if they ask me. Any help please?

Someone please explain me the meaning of this tattoo especially the part under the compass that looks lile a map.

I got this tattoo 3 weeks ago exactly. The tattoo is no longer peeling much but it is raised and not flush with the rest of my skin. Also the line work looks so much heavier than it did when it was fresh. I am concerned about tattoo blow out and/or scarring. Any advice? 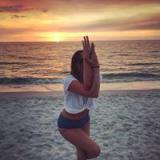 ABOUT THIS BLOG I just got a tattoo a week ago, this is how my tattoo looks a week after I got another tattoo by the same artist and the second one looks so much better. Should I be worried about infection, or did she go too deep and mess up or am I just completely screwed with this tattoo. It looks horrible now.... 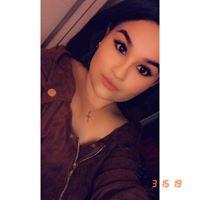 I took my first tattoo

It been 5 days since I got my first tattoo and it started peeling,it looks a bit greyish in some places  Should I be worried about this

Hey, sorry 4 comeing like this out of the blue but I have a question. This will sound weird mby but plz help me. So I can't remember the name of an artist. This artist dose flying eyes, skulls,open flying mouths and really weird shit murals also. I think he is from UK and his site is brown if it helps haha. If you have any idea what who I am talking about plz answer me. :)

White marks on my tattoo

I got my tattoo about 2 months ago and I am worried because I have white marks on it. I still have one more session with my artist but I wanted someone's opinion on it, he says he can easily shade in the white spots but I want someone's opinion. Pls reply 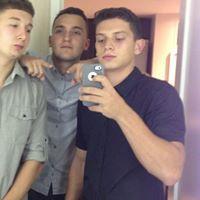 soooo i designed a medusa portrait for my sleeve, still not certain ill go with it though

i have a cherry blossom tree on the top of my arm and i cant figure out what to do with the bottom. please leave suggestions xoxoxshaysgotink 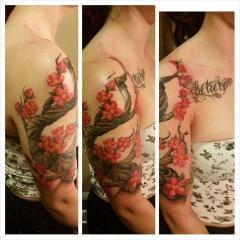 I've tried to write this before and it just wasn't working, see how we go this time! Well after getting the pipes on my outer forearm (may 2015) I started plotting what would come next. For my Step Dad I want a ship in a stormy sea being taken down by the Kraken and for my Dad I want a deer head inside a rose being stabbed by arrows. ( actual hunting arrows capable of doing damage, not those whispy hipster pinterest style ones)  Over the space of a year I played around with ideas befor

The Journey So Far...

So my husband and I were talking about tattoos recently and I said I want to be covered (barring hands neck and face). I am pretty sure he squealed on the inside before saying "If you want them, I'll buy them for you!!" He is mulling over an idea of his too which got me thinking about the whole meaningful tattoo vs that just looks fucking awesome. I am a fan of both. My husband has a mix of both. The few I currently have and the next few projects I am working on are all meaningful ones, but I 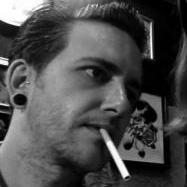 I'm doing a little tattoo traveling starting this weekend and made a little blog post about it here.

Its been a while/My new Brooklyn Shop!!

Hey, so it's been awhile since I posted on here but I figured I'd hop on and make a post about my new shop. So around last November or so my Buddy Benjamin Haft and I Decided we needed to change our situations. He and I split from our respective shops (Fun City/Three Kings) over the winter, my wonderfully generous friend Ashley Love let me work in her private studio while we built out the raw space (a former 4 car garage). We did just about all the construction ourselves with a tiny bit of out

I was asked by a dear old friend to curate an art show about the space at 491A Guerrero Street. This location is currently 5 pins Project and in another life time it was the location of the original Sacred Rose Tattoo. I’ve asked Karen Roze, Bryan Randolph, Greg Rojas, Paul Taylor, Jenn Lee, and Clifton Carter to show work with me at 5 pins Project, 491A Guerrero Street San Francisco, CA. 94110 on Friday, August 7th 6-9 pm. I've also written a blog post about it on my website so please check