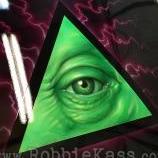 My dude Matt Brotka drew this and posted this on instagram a bit of a time ago. Very relevant. Photo, obviously from his account.

Here's a beautiful one taken from Miyazo's instagram: I will enthusiastically third how much that spot sucks to get tattooed. It feels so awful to get tattooed there.

I wish that was true. When a phrase like that gets started, some people jump on the bandwagon to use it because it sounds clever, and they will repeat it because they think it imbues them with a perc